The term Holodomor (death by hunger, in Ukrainian) refers to the period between 1932 and 1933 in which the country  dealt with massive starvation as a result of controversial Soviet policies. The Holodomor was part of the larger Soviet famine (1931-1934) that also caused mass starvation in the grain-growing regions of Soviet Russia and  Kazakhstan. The Ukrainian famine, however, was made deadlier by a series of political decrees and decisions that were aimed mostly or only at Ukraine. In acknowledgement of its scale, the famine of 1932–33 is often called the Holodomor, a term derived from the Ukrainian words for hunger (holod) and extermination (mor). 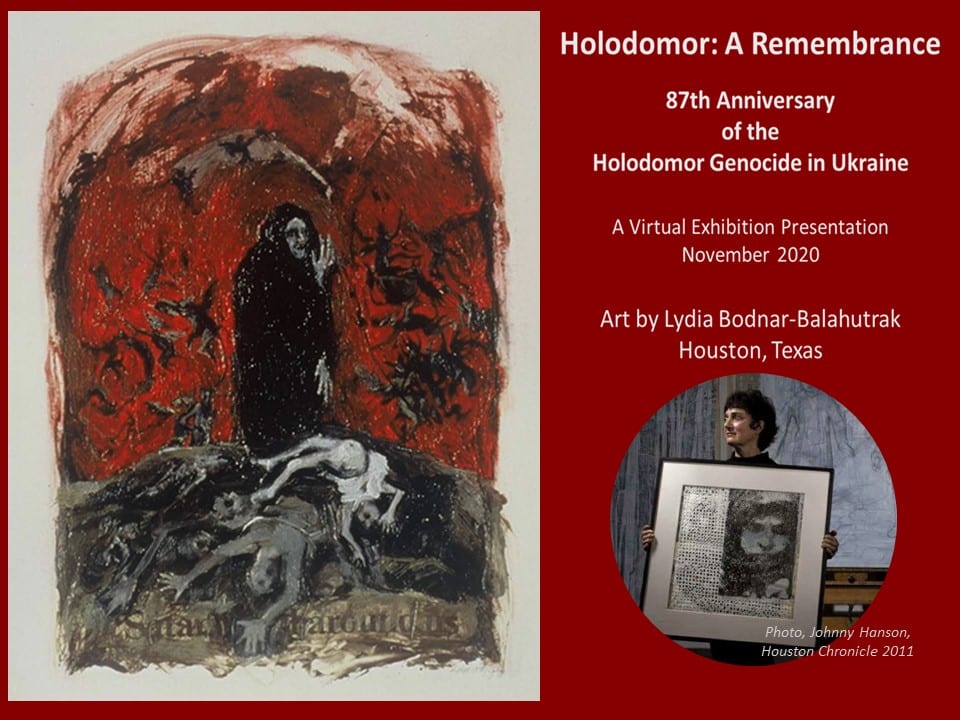 Holodomor: A Remembrance
A Virtual Visual Art Presentation
In Commemoration of the 87th Anniversary
of the Holodomor Genocide in Ukraine

The virtual exhibition Holodomor: A Remembrance commemorates the 87-year anniversary of the Holodomor Famine-Genocide, which occurred in Ukraine in 1932-33. It is a visual arts presentation featuring the works of Ukrainian-American artist Lydia Bodnar-Balahutrak.

In 1991, the artist traveled to Ukraine for the first time. She states: “My eyes and soul were opened to a land that was beautiful but ravaged by the Soviet regime. The people were long-suffering yet hopeful – the culture was rich but sabotaged. Years of Soviet oppression had left their mark and were visible everywhere. Mass graves were being uncovered, revealing horrific historical events long denied by the Soviet government.”

This new knowledge of so many innocent victims did not pull her down into despair but rather created an urgent need to tell their stories – which was also her story.

Developed by Roksolana Karmazyn (Dallas), Chrystia Bryndzia (Houston), Ksenia Rychtycka (Detroit), Anizia Karmazyn (Pittsburgh), and Olya Czerkas (St. Petersburg), the virtual exhibition team worked in collaboration with the artist, who graciously shared her 26 works of mixed-media art to be presented in the exhibition. The visual arts afford a powerful and palpable lens through which to experience history and the human experience. The artworks featured in the exhibition are striking, compelling and filled with an anguish.

“We must look in order to honor the victims and to acknowledge the past so that we can move on,” the artist maintains.

Lydia Bodnar-Balahutrak is on the Studio School Faculty of the Glassell School of Art at the Museum of Fine Arts, Houston. Her works can be found in museums and private collections in the USA and Europe.

The exhibition is being hosted virtually during November 2020, the month designated to commemorate the Famine-Genocide. Holodomor means murder by starvation and is the word used to describe the horror inflicted by Stalin and his government officials on men, women and children in a deliberate political policy of extermination by starvation. The 1932-33 Holodomor claimed millions of lives in Ukraine.

More information can be found at the Ukrainian Institute of America

← Why Is Cooperation On Climate Policy So Difficult To Achieve? The Season of Thanksgiving →
Blog