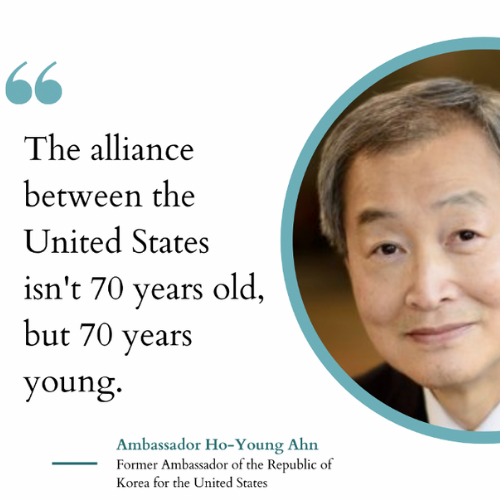 Republic of Korea and the U.S.: A vital alliance in an uncertain world with Ambassador Ahn and Ambassador Stevens

As a society, we love and crave comeback moments, whether that be in your favorite movie or television show, during a political debate, or simply watching the underdog sports team win. However, did you know that one of the greatest comeback moments in history occurred in the Republic of Korea? That’s right, during the last 30 years of the 20th century, the economy of the Republic of Korea made an extraordinary comeback, averaging a growth of approximately 9% per year, making it the 7th richest country in the world today.

Since then, South Korea and the United States have grown a beautiful alliance. They have been allies through some of the darkest wars in history such as the Cold War and the Korean War, making the United States and South Korea’s bond and combined powers strong. Ambassador Ahn states that the alliance is highly appreciated in Korea, given that we all live in a “tough world.” Ahn also states the reason this alliance has lasted so long is because each country is constantly “adapting itself to the changing environment” making it easy to work together.

Ambassador Ahn and Ambassador Stevens then go into a more pressing discussion regarding denuclearizing North Korea, and protecting the human rights of citizens in China. Unfortunately, neither Ambassador believes that North Korea will denuclearize anytime soon. However, with that said, working together to keep our defenses high and strong is the best tool to protect each of our countries from potential harm. In regards to the human rights issues in China, both Ambassadors agree that by using our voices as a whole to encourage and influence the ideals of human rights instilled in China to shift, we are able to make a change from the outside.

This seminar was educational and important to listen to for many reasons. The United States and South Korea’s bond that has been ongoing for the past 40 years is an important part of what has kept our country strong and protected to this day. Given that the Cold War and the Korean War occurred decades ago, I believe that informing the younger generation of the importance of this alliance needs to be recognized so that in the future, we are able to understand the significance of this alliance and look at it as a top priority. With Joe Biden being the new elected President of the United States and one of his top priorities being restoring and protecting

international alliances, I believe that the United States and South Korea will continue to have a secure and dominant alliance for years to come.