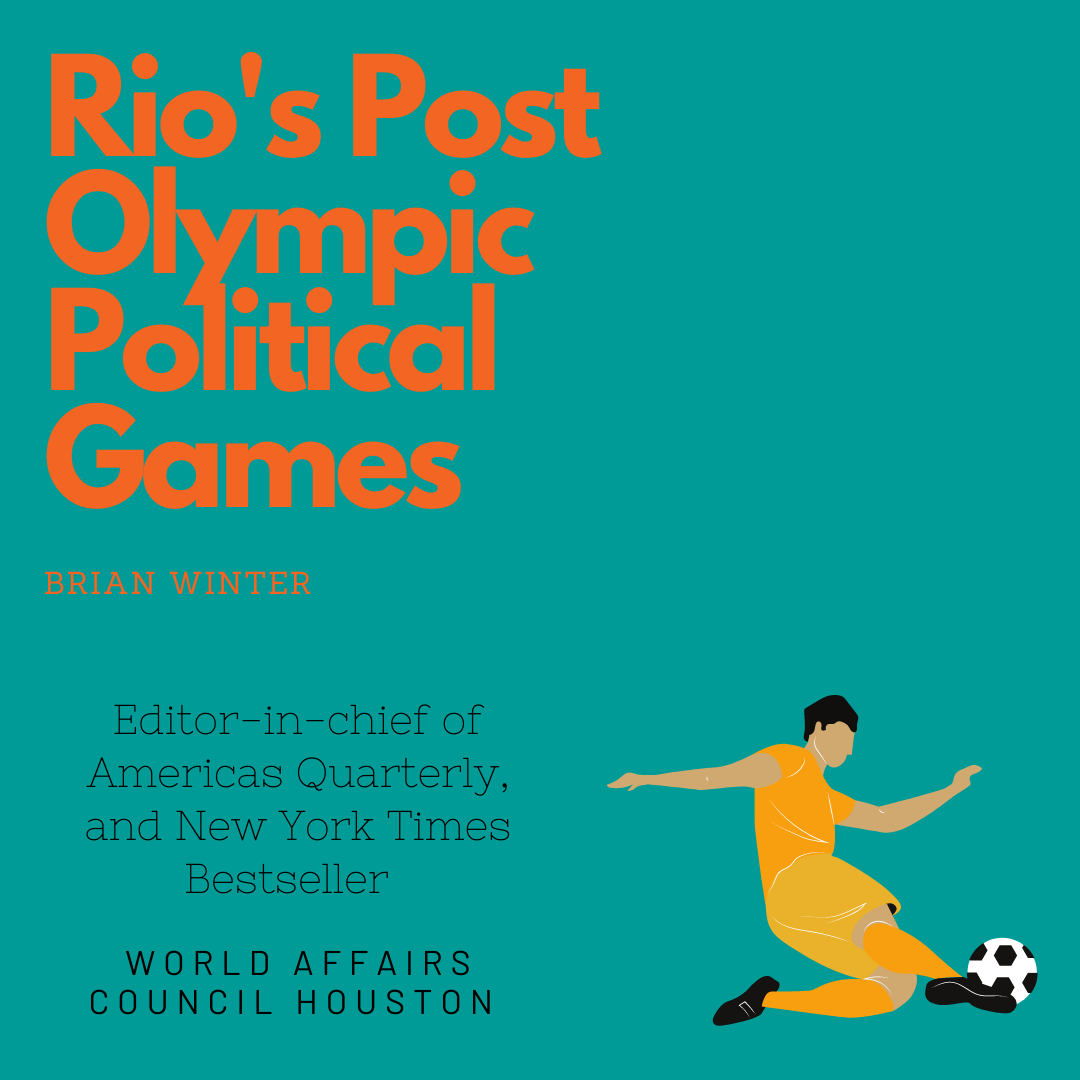 The World Affairs Council of Houston had the pleasure of Brian Winter speaking about the political climate in Brazil post Olympics. Mr. Winter is the Editor-in-chief for Americas Quarterly, Vice President for policy at American Society, the council for the Americas, and New York Times, bestselling author.

Brazil is the 5th largest country in the world in terms of size and population and is the 9th largest in terms of its economy. Mr. Winter spoke about Brazil’s rapid growth and change from 1950-1980. Compared to Asian countries like Japan, its development seems diminished, while compared to other Latin American countries, Brazil’s growth seems exceptional. However, Slavery wasn’t abolished in Brazil till 1888, which is believed to be the primary cause of poverty in Brazil before its development.

Brazil has been facing some issues due to corruption that seems to be everywhere in the Brazilian government. Michel Temer will soon be the new president of Brazil once President Dilma Rousseff is impeached. Although many may be worried about the military taking over Mr. Winter, believe that will never happen. This crisis shocked many, especially since there hasn’t been a recession that has lasted over two years in Brazil’s recent history. The corruption that is part of the crisis is a problem in Brazil and other Latin American countries. The ones who seem to be taking on this corruption are becoming heroes.

Mr. Winter was a ghostwriter for famous Brazilian soccer player Pelé. Pelé grew up in poverty like most of Brazil in the 1940s, the literacy rate was barely 50%, and life expectancy was 46 years old, which is lower than any other country today. Pelé won his first World Cup in 1958 at 17 years old. As Mr. Winter tried to learn about Pele’s life, he started by asking him how it was like sharing a table with Mick Jagger, Rod Stewart, Liza Minnelli, and Andy Warhol. Pelé said that Rod was a great guy that loved Brazil and its culture and so on. So, Winters ask about Michel Jackson’s 18th birthday party, and Pelé repeats Michel he’s a great guy that loves Brazil and its culture. Mr. Winters soon realized that Pelé was not interested in talking about all the celebrities he had met throughout his life.

The Olympics weren’t as helpful to Brazil as many thought it might be. Mr. Winter thought that there wasn’t going to be a significant tourist increase after the Olympics because many Brazilian issues became world news like pollution. Also, the IOC controls the amount of money Brazil will receive from the events. Mr. Winter believes it may have hurt Brazil more than helped. Pelé wasn’t at the Olympics, which some were concerned about.

Thank you so much to Brian Winter for informing us about Pelé’s life and the current and past issue in Brazil. If you would like to watch the seminar, please click the link here: