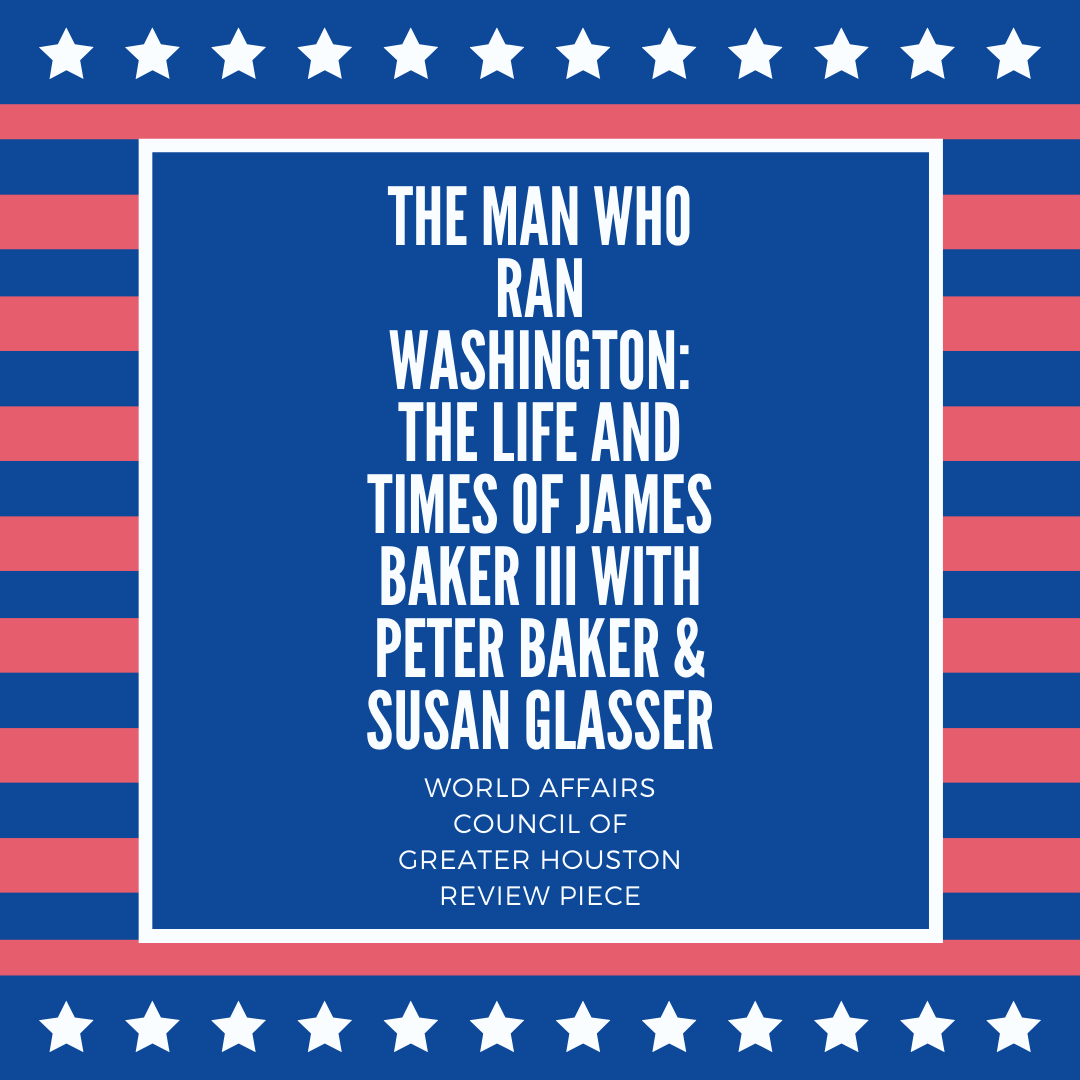 The Man Who Ran Washington – A Summary and Highlights Piece

The recent inauguration of President-elect Joe Biden and his Vice President Kamala Harris in Washington D.C. provide an ideal environment to introspectively analyze previous presidencies, the current national parties, and especially how American democracy has continually evolved over the course of American history. One specific case study refers to former President Ronald Reagan.

During his time in Washington D.C., one could argue that the successes that resulted from his presidency originated from his executive power. However, the man that truly influenced the Reagan vision and coordinated it to be as successful as it did was none other than his chief of staff, James Baker III. Political journalists and couple Susan Glasser and Peter Baker saw Baker as the focal point of a seven year analysis, conducting thorough interviews of Baker and his family, pulling archives from his time in government, analyzing what traits and upbringings made him successful in government, and how he became “The Man Who Ran Washington”. The World Affairs Council of Greater Houston had the opportunity to get further insight into the world of John Baker III through an interview with Peter Baker and Susan Glasser on October 8th, 2020. Below are some key highlights from this interview and on Baker’s life.

Baker’s final involvement in the government was quite ironic. His lineage, all the way from his great grandfather, grandfather (Captain Baker), and father (The Warden) all instilled a principle to never enter the realm of politics. His father, often called “The Warden”, taught him a set of ironclad rules–work hard, study hard, and stay out of politics. It would make complete sense as to why Baker may have listened to his elders, as they had a great influence in their niche of society, especially in Houston. For instance, Captain Baker became a patron of Rice University, one of the most prestigious college institutions of today.

For the majority of his life, Baker would comply with his family’s teachings. However, through the coincidental intersection of two paths, Baker would soon gravitate into the complexities of legislation, campaigning, and American democracy through a country club. That’s right. At a country club, Baker would go on to meet George H.W. Bush.

Overtime, their friendship began to solidify. One could even argue they became as close as brothers. When Baker’s first wife died of cancer, Bush was one of the only people Baker confided in. This example of their friendship showed how truly close they were to one another and how they could trust each other with just about anything. In this instance, we saw how Baker trusted in Bush. Very soon, we would see it occur the other way around in the election of 1980.

George H.W. Bush would secure the Democratic nomination for the presidency. However, polls and predictions showed he was in serious trouble. As a result, Dick Cheney quickly pulled Baker into the campaign team. Despite the fact that Baker had no prior experience working in campaigning, he managed to nearly come back by 30 points, almost

beating out Republican nominee Ronald Reagan. While Bush did end up losing, President Ronald Reagan became so impressed with Baker’s skill that he picked him to be his Chief of Staff.

This was rather a momentous event. As previously mentioned, Baker did not have a proficient background in government. The campaign appeared to be a strong triumph on his behalf but who knows how well he could do in this position of power. In addition, Baker would be transferring from one major party to another. Baker worked alongside Bush for the Democratic nominee, but, as Reagan’s chief of staff, Baker would be inherently aligned with Republican and conservative beliefs. Reagan’s Chief of Staff in Washington

While there were inherent doubts as to whether or not Baker would succeed as a Chief of Staff in Washington, it would be quickly dissipated as a result of his effective strategies and mindset.

Firstly, and as noted by Peter Baker, James Baker focused on the staff aspect of his title rather than the chief. Baker understood that President Reagan would establish his vision, but he would be responsible for the proper execution. Rather than trying to attain entirely unrealistic goals established by President Reagan, Baker coordinated them to be plausible and maneuvered these goals in a way that would satisfy the Democratic representatives, individuals who strayed away from Reagan’s conservative beliefs.

One of the most effective examples concerns a major tax reform enacted by Reagan. Baker spent many Saturdays working with a team to come up with an effective tax reform plan. Rather than shooting for something extreme, Baker thought to himself. Who would accept this legislation? Who would be against it? How can we adjust this plan to satisfy the most representatives? By accounting for this spectrum of interests, Baker created a plan for the compromised goals of each representative. As a result, the tax reform plan passed almost unanimously within the senate.

Another big achievement attained by Baker happened concurrently with his Soviet counterpart, Edward Shevardnadze. Up to this point in history, relations between The United States and the Soviet Union had always been wary. However, Shevardnadze and Baker were able to work against this notion, establishing an improved connection, and working towards the reunification of East and West Germany. Baker and Shevardnadze made history, as the Soviet Union and United States had not worked together since World War I.

Baker continued on his legacy in politics as chameleon, adapting towards various roles found within American government. Baker continued working as the Chief of Staff until transferring to Secretary of the Treasury position.

Baker helped to build one of the most incredible military coalitions in modern history. He aided in the unification of many major Arab states and continued maintaining militaristic relations between the Soviet Union and the United States.

Baker’s impact in American politics had a silent but profound strength. From Watergate to the end of the Cold War, Baker found a way to incorporate strategy and cleverness to bridge relations of enemy territories, work closely with people of various political ideologies, and establish his legacy in American government.

To learn more about who Baker was as an individual, more of the legislation he helped to create, and more of the endless positions Baker has had in American government, be sure to visit the World Affairs Council of Houston’s Youtube channel at this link:

You can also read The Man Who Ran Washington: The Life and Times of James A. Baker III written by Peter Baker and Susan Glasser, available where you may purchase books.