The Season of Thanksgiving

Americans all come from somewhere. Though their journey here may have been for different reasons and purposes, one thing that remains true is the connection that many cultures have with food. Their journeys are reflected in the food they or their descendants eat. Food has been a way to bring family and friends together for years through the good and bad times.

Below you’ll find some common fall festivals or thanksgiving tradition variations from around the world that celebrates the season to giving thanks.

Thanksgiving is celebrated on the second Monday in October. On this day people give thanks for a bountiful harvest typically with a menu similar to an American thanksgiving meal with turkey, stuffing, corn, sweet potatoes, cranberry sauce, are serve to family and friends.

This translates to “harvest thanksgiving festival.” Entedankfest is a religious holiday that takes place on a Sunday in September or October in Germany, in some rural areas. Traditions often observes include church services, parades, music, and a county fair. Entedankfest isn’t a widely celebrated holiday that includes a large family feast, as in other countries. 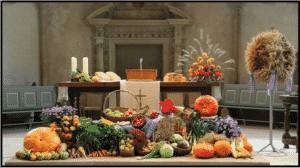 Japan’s thanksgiving evolved from an ancient rice harvest festival, Niinamesai, the roots of which go as far back as the 1868; the date of the festival was set for November 23rd and has remained the same since then.

The modern tradition of Labor Thanksgiving Day began in 1948, just three years after World War II ended, as a celebration of the rights of Japan’s workers. Today the public observes it as a national holiday, but none of the huge feasting you’ll see on the American holiday. Instead labor organizations lead events at which citizens are encouraged to celebrate hard work and community involvement. To mark the occasion, children often make thank you cards for public service officials. 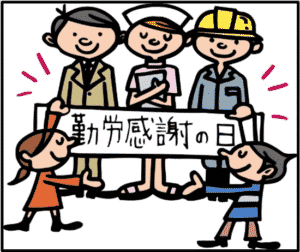 Cheuseok is a South Korean harvest festival held in September. Family members come together to share food and five thanks to their ancestors, holding a memorial service in the morning to honor them. After the memorial service and clearing of weed from the ancestor’s grave, a feast is served, featuring traditional dishes, such as song pyun (a steamed rice cake) and jeon (a Korean pancake filled with seafood and vegetables), among other things. 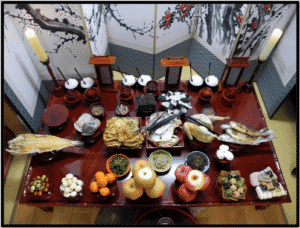 This festival commemorates the harvest, as well as family and culture. Held every September, the people of the Volta Region in Ghana give praise and thanksgiving to the gods and ancestors. As customary during this festival and the entire month of September, there is a ban on funerals. Instead, those who have passed on are remembered. Cooked yams are sprinkled outside of various shrines before celebrants can cook and taste their own yam harvest. 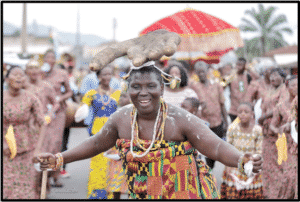 Pongal, the Indian Harvest Festival, is a time for giving thanks to nature. This festival is a four-day long celebration held in mid-January in southern India, and it contains plenty of rice, sugarcane, and turmeric. 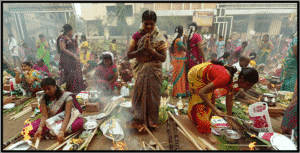 Each day has a different purpose:

Day One- pay homage to Lord Indra, the ruler of clouds who provides the rain.

Day Two- the performance of Puja (the ceremonial act of worship), where rice is boiled in milk and then symbolically offered in a small dish.

Day Three- noted as the Mattu Pongal, is the day for cows.

Day Four- requires the women of the house to wash turmeric leaf, lay it on the ground and place Pongal rice around it, asking that the house and their brothers always prosper.

No matter where you are in the world, there are plenty of ways to give thanks for the natural gifts given by nature and God. These holidays and festivals bring people together and give us a reason to celebrate. I hope that wherever you are you can find a reason to give thanks and show your appreciation for those in your community and neighborhood.

Check out this article, which features how American families celebrate both their culture and this national holiday. The American Thanksgiving: https://www.nytimes.com/interactive/2016/11/16/dining/thanksgiving-dinner-in-america.html

← Holodomor: A Remembrance New Year’s Traditions from Around the World →
Blog