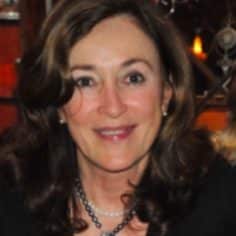 Anne Boss was born in Texas, but grew up in Venezuela. Her family then moved to London. Boss returned to the US for college, where she majored in Spanish and geology, and then returned to London in 1971. While In London she opened an office of Mesa Petroleum, which she managed for 5 years. Anne married George Boss 1974. George sold his law practice to Vinson & Elkins, and they began working together on their own companies. During this time she handled the client & investor relations and oversaw accounting. Boss also had a made-to-measure golf company In the UI (for which she did golf club and accessory design. She spent considerable time in Asia where the golf club manufacturing was done. In Spain, she owned two restaurants, which have now celebrated 20 years in business. In Houston, Boss spent 2.3 years flipping houses and is now involved in the operations of a pipeline company the couple purchased in January 2018. Anne has dual US/UK citizenship.

← John Brantley Peter Barbara →
The Board