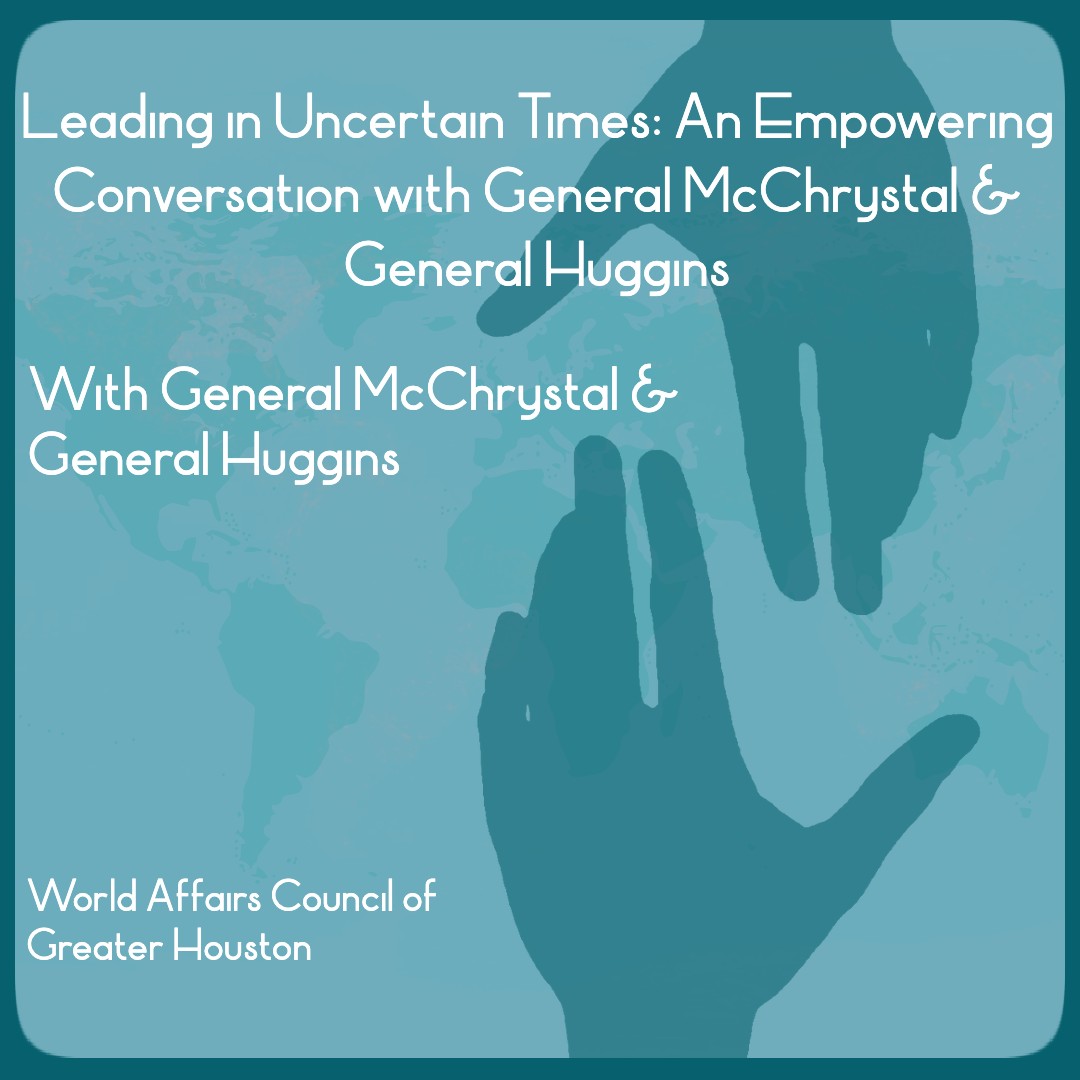 The World Affairs Council of Houston had the pleasure of welcoming General McChrystal and General Huggins. General Jim Huggins has served this country for over 35 years. General Stan McChrystal is a retired army 4 star general, as well as the former U.S. coalition forces in Afghanistan, and a former leader at Joint special operations command. His leadership has been credited with the capture of Saddam Hussein. With that being said, General McChrystal discusses in this webinar with the World Affairs Council on leaders and leadership during unprecedented times, like right now with the Covid-19 pandemic.

General McChrystal begins the webinar with a speech from Prime Minister of the United Kingdom, Winston Churchill. When the audio finishes, the General dissects and makes some interesting observations about the speech everyone just listened to. He makes some great points in how the speech was brutal and honest while also inspiring. He makes the connections towards the situation at the time in how they were harsh. It was the beginning of the second World War and Mr. Churchill had just taken office a couple of weeks earlier, so this speech was powerful in keeping the nation together.

General McChrystal proceeds on how a leader should act in times of uncertainty and discusses what the role a leader should play. Other than being brutally honest; they need to be transparent. They need to come forward and show themselves to the citizenry, take responsibility and overall come together to take on the challenge. He makes a point where groups and organizations are all trying different routes on fighting a common cause, it will not be as effective as everyone coming together.

After the conversation, there were questions asked that included the military, the digital age and mistakes that leaders often make to name a few. General McChrystal answered these questions thoroughly and gave some great answers. When asked about whether a military leader would work better for the country during a crisis like Covid-19, a war-like scenario. The general basically said to mobilize the military, but not in a way a country would during war. Setting up camps, moving assets such as ventilators, going to different states and helping as they would during a natural disaster. He makes the example of the United States during the second World War. Everyone was doing their part by either, working in factories, searching for scrap metal, or fighting out in the war.

Later on in the webinar, he was asked about the mistakes leaders tend to make in crises like the one we are facing. He starts off his answer and points out that a common mistake is to centralize decision making. Furthermore, he continues his answer and says that being directive can hinder a leader’s ability to effectively lead in a time of crisis.

One great quote from General Huggins that McChrystal brought up was that a leader’s greatest strength was in the people. We do better when we leverage the aggregate wisdom between our people. With that being said, The World Affairs Council of Greater Houston would like to thank General Huggins for moderating the event, and General McChrystal’s conversation on leaders and empowering us leadership. If you would like to see more of this webinar, please click on the link here:

← Race & Democracy in The US and Beyond with Dr. Peniel Joseph Houston Council Cabinet Round table - Belarus and its Road to Democracy →
Blog