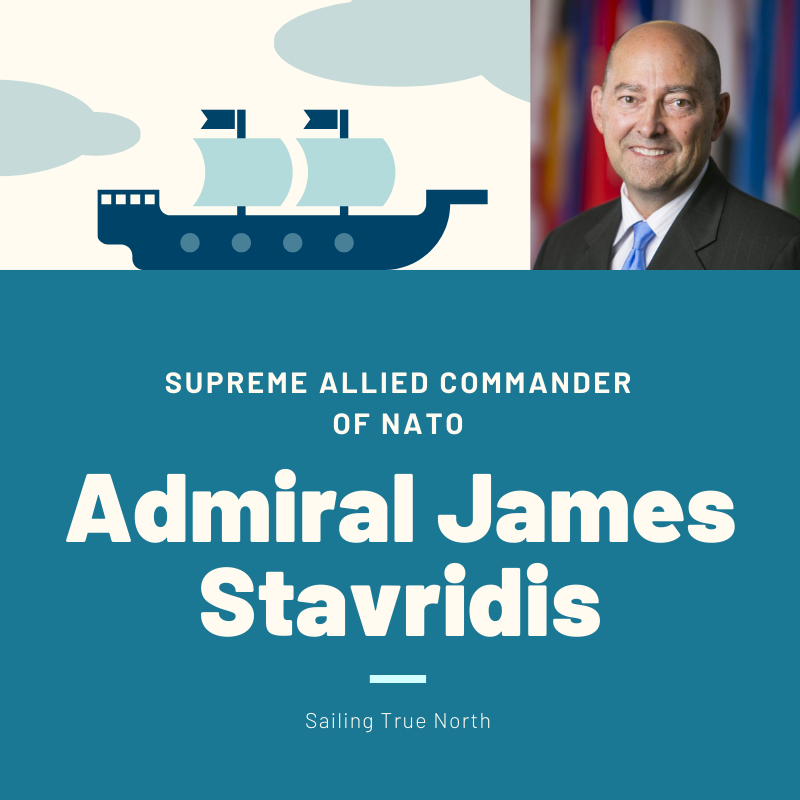 Admiral James Stavridis is an Operating Executive of The Carlyle Group, following five years as the 12th Dean of The Fletcher School of Law and Diplomacy at Tufts University. A retired 4-star officer in the U.S. Navy, he led the NATO Alliance in global operations from 2009 to 2013 as Supreme Allied Commander with responsibility for Afghanistan, Libya, the Balkans, Syria, counter-piracy, and cybersecurity. He also served as Commander of U.S. Southern Command, with responsibility for all military operations in Latin America from 2006-2009. He earned more than 50 medals, including 28 from foreign nations in his 37-year military career.

The World Affairs Council of Houston had the pleasure of wrapping up 2020 with the Supreme Allied Commander, Admiral James Stavridis, who joined the program to share and promote his new book, Sailing True North, about his inspirations and time at sea, followed by a general discussion with those in attendance.

The Admiral reveals that his book is not about leadership but rather about one’s character. As a Greek-American, he highlights the importance of freedom and democracy using the example of Themistocles, an Ancient Greek figure who used the power of persuasion to rally his troops for a battle by crying out, “tomorrow in the battle, you must row for freedom.” Like many stories rooted in the Mediterranean part of the world, the story of Themistocles is a Greek tragedy, as his pride and ego compel him to leave his home country and subsequently, at the mercy of the Persian Court.

Mr. Stavridis shares another example of a famous Admiral in the form of Zheng He, who began life as a captive but managed to climb through the highest of ranks to achieve the role of Admiral. His story represents resilience and character. Further examples mentioned by the retired 4-star officer in the U.S Navy included Sir Francis Drake, Vice Admiral Nelson, and Sir Jacky Fisher, among others, all of whom are remembered more for their character than their leadership. In total, the Admiral spoke about ten great Admirals and their stories which highlight their character.

The talk transitions to the attributes of character which gave the aforementioned Admirals the positive reputation they garnered. The first attribute mentioned is the reading of books, followed by team building, and finally speaking the truth according to the Admiral. He opens the floor for discussion by finishing his talk stating, “character is hard-work.”

The discussion begins with a question from the WACH’s Director of Programs, Ronan O’Malley, who asks the Admiral about the specialty and unique experience of those who serve at sea. Mr. Stavridis responds by identifying three attributes that develop a unique character: a sense of perspective, time to read and/or reflect, observing and conversing with crewmates. Among the responses to other questions directed at the Admiral, one of the memorable remarks made was when he mentioned that in order to better ourselves in a polarizing world, we need to commit to a service, something which is bigger than ourselves and is independent of the partisan climate the world is in.

To end the webinar, the Admiral talks about people he admires which includes his father, former Secretary of State Condoleezza Rice, Simon Bolivar, and politicians who are willing to reach across the aisle, name-checking Democrat U.S. Representative Seth Moulton and Republican Governor Charlie Baker of Massachusetts. In an ocean (pun-intended) full of books on leadership, the Admiral’s book, Sailing True North, is one of character, a trait not spoken about nearly enough as it should. The book is available in stores across the country and online.